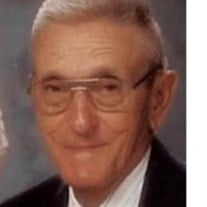 Virgil Otha Davis of Bloomfield, Indiana passed away on June 14, 2021at the age of 87 at his home surrounded by family. Born October 23, 1933, he was the youngest of five children born to Fletcher and Inez (Rainbolt) Davis. He grew up adventurous and resourceful in the country east of town. After finding life-long love in Irene (Hayes) Davis while attending Solsberry High School, the couple wed on August 8, 1952 and spent the next 68 years building a beautiful life and legacy together. Virgil was an industrious and excellent provider for his wife and their three children. As their family grew, the couple purchased land nearby his parent’s and Virgil self-built the home he and Irene would share the rest of their lives together. He liked to quip that he lived on R.R. #3 his whole life. Virgil maintained a 13-year career with General Electric as a tool and die maker before embarking on a 27-year career at Crane Naval Base where he hired in as a machinist and retired, the Director of Plant Operations of the Crane Army Ammunition Activity. Virgil was a member of the Bloomfield Masonic Lodge #84. He was an admirable example of Christian faith to all who knew him. He was a lifelong member of Walnut Grove Church of God where he taught Sunday School classes and served as the cemetery trustee as well. Virgil always appreciated the value of nature and shared that gift with others through gardening, bicycling the countryside, hunting ginseng, arrowheads, and mushrooms, hiking, and frequent vacations to the family campground in The Great Smokey Mountains, TN which is a tradition carried on by his children and grandchildren. Perhaps, he was best known for his quiet wisdom, dry sense of humor, and patient, loving, and generous spirit. After his retirement, Virgil dove into woodworking generously sharing his talent with anyone in the community who requested a piece of his quality handicraft. No request was ever too big or too small, and payment was never accepted. He came out of retirement to serve as the Richland Township Trustee for 10 years. His relationship with God and his family, especially his loving Irene, were the absolute most precious things in this world to him and he would freely say and show it. He’d also say you weren’t properly dressed without your pocket knife. One could not ask for a better husband, father, grandfather, brother, uncle, friend. He will be deeply missed and fondly remembered. Virgil is preceded in death by his parents Fletcher and Inez Davis, brothers Ivan (Virginia) Davis and Wayne Davis, sisters Beluah (Clarence) Catron and Isabelle Binkley and one grandson, Steven Curtis Davis. He is survived by his loving wife Irene (Hayes) Davis, three children Garry Davis, Steven (Kambi) Davis, Gloria (Dennis) Duncan, five grandchildren Mitzi (John) Moss, Corey Davis, Brian Davis, Jodie (Scott) Ivey, and Audrey (David) Key, six great-grandchildren Preston Moss, Kaylee Ivey, Garrett Ivey, Baby Ivey, Hudson Key, and Averyn Key, sister-in-laws Grace Davis, Joan Kay Gater and Loessa Hayes and brother-in-law Warren Hayes, many other special family members, nieces, nephews and friends. Services will be held at 2 P.M on Saturday at the Walnut Grove Church of God. Friends may call from 11 A.M. until the hour of service at the Church. In lieu of flowers, please make any donations to The Walnut Grove Cemetery and Church.

Virgil Otha Davis of Bloomfield, Indiana passed away on June 14, 2021at the age of 87 at his home surrounded by family. Born October 23, 1933, he was the youngest of five children born to Fletcher and Inez (Rainbolt) Davis. He grew up adventurous... View Obituary & Service Information

The family of Virgil Otha Davis created this Life Tributes page to make it easy to share your memories.

Virgil Otha Davis of Bloomfield, Indiana passed away on June...

Send flowers to the Davis family.