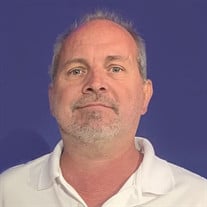 Robert “Bob” Joe Hudson, 52, of Bloomfield, passed away on Thursday, March 17, 2022 at his residence. Born October 30, 1969 in Linton, he was the son of Sally Jo Smith. He was an engineering technician for SAIC at NSWC Crane. Bob loved golfing with his friends, spending time with family, and mushroom hunting most of all. Although he loved eating morels as much as anyone else, after a sunny Saturday in the woods, he would be the first to send home his findings with family and friends so they could have a taste too. He was a momma's boy and he loved his daughters dearly. He was so proud of each of their accomplishments and was always eager to share them with others. A loyal friend and generous soul, Bob will be missed by many. Surviving relatives include: two daughters, Nicole Hudson and Jamie Hudson; his mother, Sally Smith; two brothers, Ed Hudson and John Feathers; one sister, Kelly Harden; a niece, Chelsi Feathers (Justin); nephew, Tyler Harden; one uncle, Jerry Smith; aunt, Carol Kirk (Don) and his great nephews, Camden and Corbin Gibson. He was preceded in death by his grandparents, Harlan and Selma Smith, grandmother, Emma Hudson, uncle, Terry Smith, aunt, Donna Smith and a sister-in-law, Mary Wease Feathers. Funeral services will be conducted at 11:00 a.m. on Thursday, March 24, 2022 at Jenkins Funeral Home in Bloomfield. Interment will follow in Kentucky Ridge cemetery. Public visitation will be held from 4 to 8 p.m. on Wednesday and 1 hour prior to services on Thursday at the funeral home. Online condolences are available at www.jenkinsfuneralhomes.com.

The family of Robert Joe Hudson created this Life Tributes page to make it easy to share your memories.

Robert “Bob” Joe Hudson, 52, of Bloomfield, passed away on Thursday,...

Send flowers to the Hudson family.