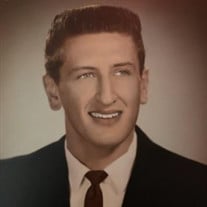 Lanny Wayne Wilson, age 73 of Owensburg, IN passed away peacefully surrounded by his family at Ascension St. Vincent Hospital of Indianapolis on October 26, 2021. Born August 2, 1948 at Dunn Hospital of Bedford, IN, the son of Wayne and Marie (Hartman) Wilson. Lanny worked construction as well as the Mining Industry as a heavy equipment operator for Shand Mining, Black Beauty and Peabody Coal. He was a Garden Extraordinaire as inherited by his father and spent time canning and sharing his famous tomatoes and peppers. Upon retirement Lanny could often be found on his John Deere maintaining his perfectly manicured lawn, planting a tree or tending to his beautiful flower gardens. He shared everyday with his high school sweetheart of 53 years, Sandra. He would light up when spending time with his grandchildren where he lovingly earned the name of “Pa”. Surviving relatives include his wife of 53 years, Sandra K. (Ashcraft) Wilson of Owensburg, IN, his two sons; Daniel Wayne (Amy) Wilson of Owensburg, IN, Michael Leroy (Brenda) Wilson of Springville, IN, grandchildren, AJ (Alisha) Bowers of Eastern Greene, Justin Wilson of Bloomington, IN, Maddison Kaye (Brent) Fielder of Eastern Greene and Logan Wilson of Springville, IN. Five great grandchildren; Jason Koontz, Rylon Bowers, Nash Fielder, Knox Fielder and Emersyn Bowers all of Eastern Greene, Aunt Melba (Hartman) Floyd of Bloomington, IN, niece Julia Corwin of Bloomington, IN and nephew D. Marty Corwin of Solsberry, IN. He was preceded in death by his parents, sister Lynn Corwin, brother-in-law Ron Corwin and several aunts and uncles. There will be no public visitation. A private service will be conducted at a later date. The family asks that all memorial donations be made at any Farmers & Mechanics c/o Amy Wilson in Lanny’s name for the Lanny Wilson Garden to be used for landscaping and greenery around the newly renovated Owensburg Museum/Library of Owensburg, IN. Online condolences and memories can be shared at www.jenkinsfuneralhomes.com

Lanny Wayne Wilson, age 73 of Owensburg, IN passed away peacefully surrounded by his family at Ascension St. Vincent Hospital of Indianapolis on October 26, 2021. Born August 2, 1948 at Dunn Hospital of Bedford, IN, the son of Wayne and Marie... View Obituary & Service Information

The family of Lanny W. Wilson created this Life Tributes page to make it easy to share your memories.

Lanny Wayne Wilson, age 73 of Owensburg, IN passed away peacefully...

Send flowers to the Wilson family.