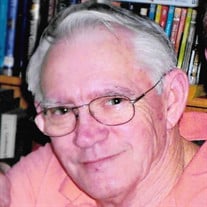 John H. Lacer, 77, of Bloomfield, passed away on Sunday, October 4, 2020 at the Villages of Oak Ridge in Washington. Born October 21, 1942 in Greene County, he was the son of Todd Harold and Mable Maurine (Cooper) Lacer. He attended Bloomfield High School. While in High School he worked part time as a meat cutter at IGA. After high school, he worked for J.L. Wilson Lumber Company helping to build bridges. He married Janet Smiley in 1964. After his two sons were born, he started working at Westinghouse to be closer to home and later retired from there. He married Sally Collins on July 17, 1998. He served in the National Guard for six years. He was a member of the Antioch Christian Church in Bloomfield, the Oddfellows club in Odon and enjoyed coaching his sons, hunting, fishing and bingo. He was a member of the original Chain Gang for the North Daviess football team. Surviving relatives include: two sons, Steve Lacer (Angie) and Jeff Lacer (Michelle) both of Camby; two step daughters, Kerri Hash (Paul) of Bloomfield and Kenya Wohlwend (Andy) of Lafayette; one sister, Connie Lacer of Mooresville; his grandchildren, Ashlee Peters (Greg) and Jessie Lacer (Austin Shell) both of Indianapolis; step grandchildren, Megann Johnson (Joe) of Washington, Joe Hash (Mikayla) of Bloomfield, Justin Hash (Kinzee) of Bicknell, and Kortney Hargrove (Cassie), Logan Alexander (Paige) and Kinley Wohlwend all of Lafayette: one great grandchild, Emma Peters of Southport; and a cousin, Richard Byers (Joyce). He was preceded in death by his wife, Sally Ann Lacer on June 2, 2020, two brothers, Jimmy D. and Billy G. Lacer and his parents. Memorial services will be conducted at 2:00 p.m. on Sunday, October 11, 2020 at Antioch Christian Church in Bloomfield, with Rev. Jack Tolbert and Rev. Arlen Pope officiating. Public visitation will be held from 1:00 p.m. to 2:00 p.m. on Sunday at the church. Jenkins Funeral Home in Bloomfield is in charge of arrangements. In lieu of flowers, donations can be made to the American Stroke Association. www2.heart.org. Online condolences to the family are available at www.jenkinsfuneralhomes.com.

John H. Lacer, 77, of Bloomfield, passed away on Sunday, October 4, 2020 at the Villages of Oak Ridge in Washington. Born October 21, 1942 in Greene County, he was the son of Todd Harold and Mable Maurine (Cooper) Lacer. He attended Bloomfield... View Obituary & Service Information

The family of John H. Lacer created this Life Tributes page to make it easy to share your memories.

John H. Lacer, 77, of Bloomfield, passed away on Sunday, October...

Send flowers to the Lacer family.