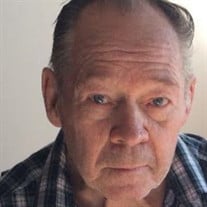 Jerry “Mike” New — restless traveler, prolific teller of stories and jokes, and generous patriarch of a large and loving family— passed away on March, 17, 2021. Mike was born on May 26, 1939, in Ellettsville, Indiana, to Curtis and Mae New. He was the baby of the family, growing up behind three brothers and one sister. He met his future wife, Sybil, when he was just 15 years old. She was 16. They first crossed paths on a rainy day in Bloomington. She was walking down Twelfth Street with her friends. He was walking with his parents. They went on a date the next week. At first, Sybil’s mother was wary of the young man who came courting her daughter while dressed like a James Dean character. Ignoring her mother’s protests, Sybil climbed on the back of Mike’s motorcycle, and they fell in love speeding across the rolling hills of Southern Indiana. They were married on January 19, 1957. Despite his landlocked roots, Mike possessed a roving spirit. As a boiler technician in the U.S. Navy, he traveled to Japan, Italy, Hong Kong, and the Philippines. His travels did not end there. After seven years in the Navy, he frequently trekked throughout the western United States, road-tripping with his older brothers in search of odd jobs and, occasionally, adventure. As his family with Sybil grew, so did the need for him to remain closer to home. Although he dropped out of high school, Mike was a gifted electrician, and he soon settled into a job at General Motors, where he remained for three decades until his retirement. Mike was a caring father to his seven children, working hard to provide them with the best life possible. While money was often tight, his family could barely compliment the coat he was wearing without him handing it over on the spot. That family grew to include dozens of grandchildren and great grandchildren. They too would know his quietly generous spirit. The house Mike and Sybil shared for many years in Solsberry was a bustling second home for his many grandkids, who, on any given day, could be found swimming in the backyard pool, sledding down the hill behind the house, and sitting with Grandpa as he watched old westerns and episodes of Gunsmoke. Perched in his recliner, Mike was always quick to offer a good story — or a bad joke — to those nearby. Mike spent his final years in Bloomfield, battling chronic kidney disease. Soon after he began hospice care, Sybil was injured and spent several weeks hospitalized and in rehab. Though Mike’s prognosis was grim, he held on long enough to see his wife of 64 years return home. Mike was preceded in death by his parents, his siblings — Austin, Jack, Roby, and Phyllis — and his eldest son Austin “Rod” New. He is survived by his wife Sybil, and six of his children, Bill, Kevin (Paula), Dan (Lisa), Roy (Michelle), Larry, and Lora, as well as Rod’s widow, Brenda. He also leaves behind numerous grandchildren and great grandchildren. They will all miss him terribly. Mike’s family would like to thank Beth and Brenda from Heart to Heart Hospice for all of their care and advice. A memorial service will be held on Sunday, March 21, at Lester Jenkins & Sons Funeral Home in Bloomfield. The viewing will be from noon to 2 p.m., with the service taking place immediately after. In lieu of flowers, donations may be made to the American Kidney Fund.

The family of Jerry Mike New created this Life Tributes page to make it easy to share your memories.

Send flowers to the New family.