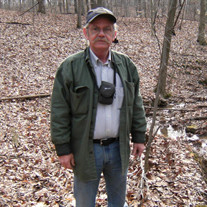 Jerry Lee McCracken, 69, of Bloomfield, passed away peacefully Friday, March 4, 2022, at his home. Born December 13, 1952 in Linton, Indiana, he was the son of Alexander and Ella (Fry) McCracken. Jerry is a 1970 graduate of Shakamak High School. He married Linda Fay (Fields) on January 15, 1972. Jerry retired from NSWC Crane, proudly served in the United States Army and Indiana National Guard, and was a member of the American Legion Memorial Post 196 in Bloomfield. He fondly shared memories of his time stationed in Germany, which he was able to experience with his wife Linda. He enjoyed spending time outdoors, feeding birds, watching wildlife, and mushroom hunting. Jerry was involved in Scouting during his youth, and shared his enthusiasm for the program with his son and grandson throughout the years. He cared deeply for his children and grandchildren and always showed great pride in their accomplishments. Surviving relatives include his children, Douglas W. McCracken of Ellettsville, Indiana; Jennifer J. McCracken (Christopher Andre Phillips) of Ogden, Utah; his grandchildren Jeremiah J. McCracken, Cora C. McCracken, and Emerson L. Phillips; his siblings, Bill McCracken (Anita) of Coalmont, Indiana, Judy Francis (David) of Mooresville, Indiana, and Penny Parson (James) of Coalmont, Indiana. Jerry also leaves behind many loving nephews. Jerry was preceded in death by his wife, Linda on December 15, 2018; his half-sister, Sharon S. Jackson; and his parents. There will be no public visitation. A celebration of life will be held by the family at a later date. In lieu of flowers, contributions can be made to the Sycamore Land Trust (https://sycamorelandtrust.org/donate/) in memory of Jerry McCracken. Online condolences and memories can be shared at www.jenkinsfuneralhomes.com.

Jerry Lee McCracken, 69, of Bloomfield, passed away peacefully Friday, March 4, 2022, at his home. Born December 13, 1952 in Linton, Indiana, he was the son of Alexander and Ella (Fry) McCracken. Jerry is a 1970 graduate of Shakamak High School.... View Obituary & Service Information

The family of Jerry Lee McCracken created this Life Tributes page to make it easy to share your memories.

Send flowers to the McCracken family.