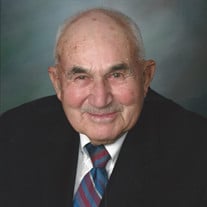 Jack Benham, 93, of Worthington passed away Tuesday December 10, 2019 at his residence surrounded by his family. Born June 15, 1926 in Greene County, Indiana the son of Elmer “Jack” and Beulah (Arthur) Benham. Jack was a retired farmer and had served on the REMC board of directors, he was a member of the Folsom Memorial United Methodist Church and the Knights of Pythias. Surviving relatives include his children, Terry (Beverly) Benham of Worthington, Jacquelyn Benham (Larry Burleson) of Maynardville, Tennessee; Jeanne Elliott of Lawrenceburg, Kentucky; his grandchildren, Kevin Benham and Dena (Dean) Martin all of Worthington, Todd Elliott and Tonya Elliott both of Lawrenceburg, Kentucky; his great-grandchildren, Aden Benham, Maya Benham, Edan Martin, Ande Martin, Kristen Waddle and Kasey Hall, two great great-grandchildren, Kaylee Junkin, Weston Wainscott and a brother-in-law Billy Joe White. Jack was preceded in death by his wife, Helena Evelyn Benham on January 19, 2014; one son, Jackie Joe Benham, a sister, Betty Kaho, son-in-law Bob Elliott and his parents. Friends can call from 4 to 8 P.M. on Thursday at Jenkins Funeral Home in Lyons with a Knights of Pythias service at 7 P.M. and 10 A.M. Friday until the hour of service at the Prairie Chapel United Methodist Church. Services will be held 11:00 A.M. on Friday at the Prairie Chapel United Methodist with Pastor Rick Pressel and Jim Weimer officiating. Burial will follow at Prairie Chapel Cemetery. The family wishes any memorial donations be made to Worthington Senior Citizens Center in Jack’s name. Online condolences and memories can be shared at www.jenkinsfuneralhomes.com.

The family of Jack Benham created this Life Tributes page to make it easy to share your memories.

Send flowers to the Benham family.